Top 10 Cities in Europe for AI

Europe is a key market for artificial intelligence. Pouring enormous resources into digital transformation initiatives like Europe’s Digital Decade and investor interest specifically in AI startups, the continent is an exciting place for those interested in AI. Here are our top five choices for cities in Europe for AI to watch for big things to come, plus five up-and-coming cities headed for big things in the next few years.

The UK capital is home to DeepMind—what more could there be? Actually, London is a thriving hub for artificial intelligence, so it’s no wonder that one of the most famous examples began right here.

According to a mayor’s office survey conducted by CognitionX, over 600 AI-based companies have a headquarters in London. In addition, the city offers a 42% new AI supplier formation rate compared to the world average of 24%. Although London lags a bit behind other cities in Europe for practical business adoption, it does offer plenty of AI providers for B2B industries like education, healthcare, and insurance.

London is also positioning itself as a leader in AI Ethics. In fact, with the creation of the Center for Data Ethics, the city will analyze AI governance to provide blueprints for moving forward that other cities can follow. This puts AI leaders in London in the position of being able to influence the overall direction and relationship between AI and society—exciting possibilities.

Berlin is also set up as a common headquarters for AI companies, in particular, international companies. Amazon, SAP, and Zalando all have headquarters in Berlin and are currently pushing the boundaries of what artificial intelligence-driven tools can offer their customers.

The city is home to over 100 AI startups. Innovation is also supported by four different education and research institutions. These research groups include the German Center for Artificial Intelligence, the Zuse Institute, the Einstein Center for Digital Future, and several Max Planck institutes. In addition, the Berlin Institute for the Foundations of Learning and Data (BIFOLD), formed from merging the Berlin Big Data Center (BBDC) and the Berlin Center for Machine Learning (BZML), offer further guidance on AI innovation.

Stockholm is known as the “unicorn factory” of Europe. With billion-dollar startups housed in the city, major hackathons and conferences like Tech Fest and Tech Week, and over 1000 positions in AI per one million, Stockholm offers plenty of opportunities to get into a major startup or established business and make a name for yourself.

The city’s KTH Royal Institute of Technology is working with the Massachusetts Institute of Technology to deploy AI and big data in urban planning, while other research institutions are attracting input in fields like healthcare. Plus, Stockholm scored highest for AI readiness overall from Oliver Wyman Forum, so AI practitioners could be surrounded by the very things they create.

AI Sweden offers a research center for the practical and applied application of AI with strategic programs, talent factories, and change agent support for businesses. Plus, there are about 154 AI startups in the city, covering a variety of industries.

Dublin already has a thriving tech scene. It boasts headquarters for Pinterest, Google, and Facebook, located in an area known as Silicon Docks. A survey from Eurostat also found that Dublin features the highest concentration of enterprises leveraging AI in the entire continent.

The city is particularly known for its involvement in deep tech. Universities such as Trinity College Dublin and The University of Limerick offer AI innovation labs and partner with local AI companies to put students into applied studies positions.

Funding is also high for Dublin, with firms such as Enterprise Ireland investing heavily in deep tech startups. Plus, with a good concentration of big enterprises like Google and niche-tech startups like Shopbox.ai, Dublin offers a range of AI paths to suit just about anyone.

France president Emmanuel Macron famously pledged $1.8 billion back in 2018 to distribute up to this year for AI development and R&D. In addition, several AI organizations announced recruiting efforts or have opened headquarters in the city, including DeepMind, Samsung, and IBM.

Paris is also seen as a business-friendly hub with fewer barriers to begin a business, making the city an especially attractive choice for startups in the next few years. It’s currently home to nearly 400 startups, according to The United Nations Office for Global Artificial Intelligence.

The city wants to overcome a slow start in technology by pouring public dollars into research, building business-friendly laws and policies, and implementing secondary education that helps reduce the skills gap in technology.

Pay close attention to these cities in Europe for AI. They’ll make significant strides in the next few years.

Malta recently launched an entire AI being, Marija. It’s an interactive “virtual citizen” designed to help tourists immerse themselves in everything Malta can offer. In addition, the country is positioning itself as an AI launchpad, with artificial intelligence dominating every part of life in the country.

Estonia is on track to becoming the world’s most digital society. Estonia has more than 80 public sector projects using AI implemented by 40 different public and private organizations. Now, the country’s AI strategy is expanding over the next few years to engage the private sector as well. Estonia’s AI Taskforce has been working behind the scenes for three years to make this a reality. In addition, the country is also facilitating AI startups through public initiatives.

Already a tech hub, Lisbon belongs to Portugal’s national AI strategy as the home of several AI startups. In addition, it’s home to some leading technology universities and meetups for AI experts. Plus, it offers a rich investment opportunity for startups that outpaces the European continent.

In 2022, IE University and IBM will launch a Madrid AI hub. It’s part of a push to make Madrid part of a global artificial intelligence ecosystem and will facilitate students to connect their projects in the program to key figures in the international AI scene. Students will also gain access to IBM products for their projects.

Edinburgh is home to the UK’s longest established AI research center (located at the University of Edinburgh). In addition, the city launched the Covid-19 Data and Intelligence Network to apply AI to decision-making during the pandemic. The city has a vision for becoming an AI leader, as well as offering £20 million to develop an AI Hub for Life Science, NHS, and Social Care to create AI innovation and commercialization capability in Scotland.

Coming up this June 15th and 16th in London – and virtually – ODSC Europe will highlight developments from startups, research labs, universities, and more from around Europe and the cities in Europe for AI. Here are a few sessions we have lined up so far: 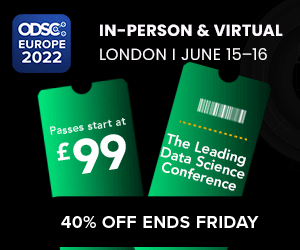