How Can a Democracy Effectively Respond to COVID-19: Lessons from Taiwan

How Can a Democracy Effectively Respond to COVID-19: Lessons from Taiwan

Abstract: In January and February of 2020, Taiwan has rapidly produced and implemented a list of at least 124 action items within 5 weeks (3 to 4 per day) to protect public health. The policies and actions go beyond border control because they recognized that that’s not enough. Stopping infections require case identification and monitoring of close contacts; Taiwan has used new integrated data and technology to accomplish that. Quarantines of individuals can be difficult and the government treats individuals with care and dignity. Health officials also proactively find new cases by retesting those tested negative for flu. The government actively manages and distributes key resources to make sure frontline health workers and those at risk have masks and protective gear, reassures the public while fighting misinformation, negotiates with other countries and regions, formulates policies toward schools and childcare, and provides relief to businesses and workers under quarantine. This has resulted in one of the lowest infection rates and case fatality rates in the world so far.

Bio: C. Jason Wang, MD, PhD, is the Director of the Center for Policy, Outcomes, and Prevention, and Associate Professor of Pediatrics and Medicine at Stanford University. He also co-chairs the mobile health and other new technologies group at the Stanford Center for Population Health Sciences. He received his B.S. from MIT, Medical Doctorate from Harvard Medical School, and Ph.D. in policy analysis from RAND. After completing his pediatric residency training at UCSF, he worked in Greater China with McKinsey and Company. In 2000, he was recruited to serve as the project manager for Taiwan’s Healthcare Reform Taskforce. In 2012, he co-founded MedicusTek, a global medical solutions company focusing on medical internet of things and patient safety. Among his honors, he was selected as the student speaker for the Harvard Medical School commencement ceremony in 1996 and was a recipient of the 2011 NIH Director’s New Innovator Award. His article in JAMA, “Response to COVID-19 in Taiwan: Big Data Analytics, New Technology, and Proactive Testing” was viewed 812,449 times (as of April 11, 2020); and was covered by 185 media outlets world-wide. 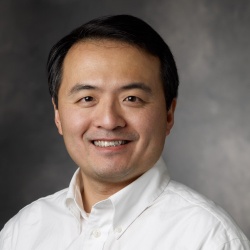 Director of Center for Policy, Outcomes and Prevention | Stanford University