Abstract: Sample this – two cities in India; Mumbai and Pune, though only 80kms apart have a distinctly varied spoken dialect. Even stranger is the fact that their sign languages are also distinct, having some very varied signs for the same objects/expressions/phrases. While regional diversification in spoken languages and scripts are well known and widely documented, apparently, this has percolated in sign language as well, essentially resulting in multiple sign languages across the country. To help overcome these inconsistencies and to standardize sign language in India, I am collaborating with the Centre for Research and Development of Deaf & Mute (an NGO in Pune) and Google. Adopting a two-pronged approach: a) I have developed an Indian Sign Language Recognition System (ISLAR) which utilizes Artificial Intelligence to accurately identify signs and translate them into text/vocals in real-time, and b) have proposed standardization of sign languages across India to the Government of India and the Indian Sign Language Research and Training Centre.

As previously mentioned, the initiative aims to develop a lightweight machine-learning model, for 14 million speech/hearing impaired Indians, that is suitable for Indian conditions along with the flexibility to incorporate multiple signs for the same gesture. More importantly, unlike other implementations, which utilize additional external hardware, this approach, which utilizes a common surgical glove and a ubiquitous camera smartphone, has the potential of hardware-related savings at an all-India level. ISLAR received great attention from the open-source community with Google inviting me to their India and global headquarters in Bangalore and California, respectively, to interact with and share my work with the TensorFlow team.

Bio: Akshay Bahadur’s interest in computer science sparked when he was working on a women's safety application aimed towards the women's welfare in India and since then he has been incessantly tackling social issues in India through technology. He is currently working alongside Google to make an Indian sign language recognition system (ISLAR) specifically aimed at running on low resource environments for developing countries. His ambition is to make valuable contributions towards the ML community and leave a message of perseverance and tenacity.

He’s one out of 8 Google Developers Expert (Machine Learning) from India along with being one of 150 members worldwide for the Intel Software Innovator program. 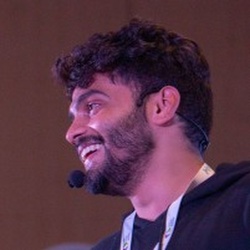