Abstract: In this session we will discuss how tools from machine learning can help practitioners move beyond the "run an A/B test, check significance, launch if the test group is better than the control group." We will focus on the case where hundreds of A/B tests are run in the course of daily practice.

Bio: Alexander Peysakhovich is technically a behavioral economist, but he bristles a bit at being defined that narrowly. He's a scientist in Facebook's artificial intelligence research lab, as well as a prolific scholar, having posted five papers in 2016 alone. He has a Ph.D. from Harvard University, where he won a teaching award, and has published articles in the New York Times, Wired, and several prestigious academic journals.
Despite these accomplishments, Peysakhovich says, "I'm most proud of the fact that I've managed to learn enough of lots of different fields so that I can work on problems that I'm interested in using those methods. I've co-authored with economists, game theorists, computer scientists, neuroscientists, psychologists, evolutionary biologists, and statisticians.

Peysakhovich's interdisciplinary work is driven by his deep interest in understanding decision-making—both human and machine—and by his desire to figure out how artificial intelligence can improve our decision-making processes. He builds tools that help people make better choices, and machines that can turn data into, as he puts it, "not just correlations but actual causal relationships." 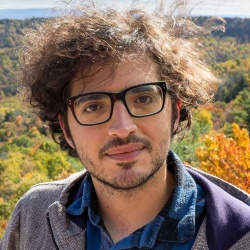