Abstract: New data technologies paved the way for businesses to store large amounts of data at relatively little cost which opened an opportunity for machine learning applications to enter business environments. Machine learning applications have developed rapidly and have established a significant impact on everyday life, industrial production, financial transactions and many other fields.

However, yet another powerful class of predictive models exists that is currently underutilized in business environments: Modeling from first principles or system modeling. Even though system modeling has been driving our civilization’s progress in the past century, it still remains mostly constrained to (academic) research.
In this talk the speaker will provide a high-level comparison of the two predictive modeling approaches, discuss respective strengths and weaknesses and present some real-world use-cases of hybrid solutions that have critically contributed to global recommender systems at Boehringer Ingelheim. The speaker will highlight several system modeling techniques and provide practical advice on their application.

Although the fundamental concepts of machine learning have been established many decades ago it is still a young discipline compared to some of the very established methods of system modeling. Machine learning establishes the ability to predict future behavior of a system by learning from past observations - represented in the form of historic data. The ability to predict a system’s behavior is a fundamental part of any decision making and can be utilized in many different ways, for instance to operate vehicles and machinery, decide when to shut down a machine for maintenance or when to buy or sell financial assets. Machine learning depends crucially on the relevance, quality and quantity of available data. Generally, the more data is available to train a machine learning algorithm, the stronger the outcomes will be. Many classes of machine learning and AI algorithms are available and the field is developing rapidly.

System modeling is the mathematical tool set behind theoretical and computational physics which has significantly driven the development of our understanding of the universe and our civilizations progress through the translation into technology.
In contrast to machine learning, system modeling establishes predictive abilities by modeling the fundamental underlying principles of a system. Science has demonstrated that this approach is not limited to systems which are based on clean well-known rules, like clean deterministic physical systems. Instead, the approach of system modeling can be successfully applied to complex and noisy statistical systems like quantum field theory especially when combined with computational power.
System modeling includes probabilistic and statistical modeling, Monte Carlo simulations, hidden variable models, Markov Random Field (MRF) approaches, causal inference techniques, diffusion models, game theory, finite element simulations, Potts models, mean-field approaches and countless other well-established methods.

Bio: Dr. Diesinger is a passionate data scientist who firmly believes that data-driven scientific problem solving will significantly transform industries and economies on a large scale.

Dr. Diesinger holds a PhD in theoretical physics and started his career as a data scientist in 2009 as a researcher at the Massachusetts Institute of Technology. From 2012, he worked for different companies and startups and joined with SAP Global Data Science Consulting in 2014. At SAP, he developed smart data science solutions for globally operating customers and scaled the data science team’s life science engagements.

Dr. Diesinger joined with Boehringer Ingelheim in November 2015 as Global Head of Data Science and has since been leading and developing the company’s data science capabilities following a quant-level approach driven by the philosophy that the impact of data science is maximized through bright minds and scaled through technology. The artificial intelligence solutions Dr. Diesinger and his team have been working on enabled Boehringer Ingelheim to adopt industry leading positions in key areas. 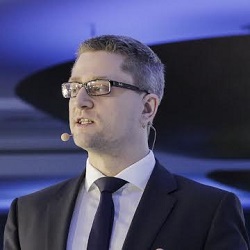