Abstract: Machine learning provides us with an amazing set of tools to make predictions, but how much should we trust particular predictions? To answer this, we need a way of estimating the confidence we should have in particular predictions of black-box models. Standard tools for doing this give guarantees that are averages over predictions. For instance, in a medical application, such tools might paper over poor performance on one medically relevant demographic group if it is made up for by higher performance on another group. Standard methods also depend on the data distribution being static — in other words, the future should be like the past.

In this lecture, we will describe a new technique to address both these problems: a way to produce prediction sets for arbitrary black-box prediction methods that have correct empirical coverage even when the data distribution might change in arbitrary, unanticipated ways and such that we have correct coverage even when we zoom in to focus on demographic groups that can be arbitrary and intersecting.

Bio: Aaron Roth is the Henry Salvatori Professor of Computer and Cognitive Science, in the Computer and Information Sciences department at the University of Pennsylvania, with a secondary appointment in the Wharton statistics department. He is affiliated with the Warren Center for Network and Data Science, and co-director of the Networked and Social Systems Engineering (NETS) program. He is also an Amazon Scholar at Amazon AWS. He is the recipient of a Presidential Early Career Award for Scientists and Engineers (PECASE) awarded by President Obama in 2016, an Alfred P. Sloan Research Fellowship, an NSF CAREER award, and research awards from Yahoo, Amazon, and Google. His research focuses on the algorithmic foundations of data privacy, algorithmic fairness, game theory, learning theory, and machine learning. Together with Cynthia Dwork, he is the author of the book “The Algorithmic Foundations of Differential Privacy.” Together with Michael Kearns, he is the author of “The Ethical Algorithm”. 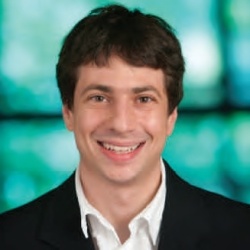 Professor of Computer and Cognitive Science | University of Pennsylvania