Towards Reasoning based Conversation Systems

In this talk we “organize” chatbots across a “spectrum of sophistication” and present as case-studies two examples of next generation reasoning based chatbots. First a higher order question answering (level 4) chatbot (that goes beyond factoid question answering) that we believe is one of the keys to artificial general intelligence. Second, a (level 7) Diagnosis chatbot that can mimic a doctor’s differential diagnosis conversation that infers, with a very high precision and recall, the potential diseases given the symptoms of a patient while via a series of follow-up questions.

- How to think about Conversation Systems in a more holistic manner?
- What are the dimensions along which conversation systems can be characterized?
- Why it has not been possible to go beyond factoid based question answering to more reasoning based question answering?
- Why solving that problem would give us an important leap towards artificial general intelligence?
- How the diagnosis-as-a-service can be built as a conversation system to alleviate one of the core bottlenecks in a reactive medical journey of a patient from symptoms to cure?

Bio: Dr. Shailesh Kumar is currently the Chief Data Scientist at the Centre of Excellence in AI/ML, Reliance Jio. Prior to this he worked as a Distinguished Scientist at Ola cabs, Chief Scientist and Co-founder of Third Leap, an EdTech startup, Researcher in the Google Brain team, Sr. Scientist at Yahoo! Labs and Principal Scientist at Fair Isaac Research.

Dr. Kumar has 18 years of experience in building AI solutions in a variety of domains including Web, Retail, Finance, Remote Sensing, Fleet Management, Computer Vision, Knowledge Graph, and Conversational computing. He has published over 20 international papers and book chapters and holds more than 20 patents in AI/ML. He was recognised as one of the top 10 data scientists in India in 2015 by Analytics India Magazine. Dr. Kumar holds a Masters and PhD in AI from UT-Austin and B.Tech. in Computer Science from IIT-Varanasi. 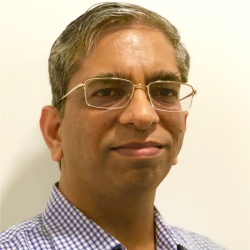